Byron camera has a custom back system, accept most of film holder in Graflok (or International Standard back), two clamps at right side and two sliding teeth at left side, ensure film holder to be securely hold.

As a 4x5 format camera, Byron is set as a snap shooter, you can take as many film as possible when subject appears comparing to view or press camera, this camera is dedicated to those film holders who can hold as many films as possible.

To 4x5 sheet films, there are film holders like Grafmatic 1268 6 pack film holder, Fuji Quickchange 8 pack film holder available, and they perfectly match with Byron back system, no need any modification, or just a minor job to do. But for those user who gets used to use Double Side Slide film holder, which needs Graflex back to "sandwich" holder on camera back, which Byron lacks, I proposed some ideas to adapt it on Byron, not very ideal, but works.

Sometimes I need to use DDS film holder, like the situations when I would like to have the negatives developed individually with different solutions or developing time, that is quite normal if you apply Zone System on them, especially if you use developing tube like BTZS tubes, it is very easy to achieve.


Actually I am proud of the function that Byron back holds the pull-out slide when shooting, in the video top above shows that Byron rotating lock holds the slide, not only frees your hand, and best of all, reminds you to slides it back when you finish shooting and ready to flip the holder for another shoot. Think about it, you don't have spare hand to hold it, and there won't be a table besides you to keep the slide, for Byron is operated when you are in mobile status, you are not in a studio!

Ralf sent some DDS holders to me, asking to modify them following the ideas I proposed, to have two ditches at each side, let clamps grab the holder more securely.

I inspected the idea I proposed, and felt that there are space to improve.

Looking the ditches I had to make at side of holder, you will see that clamp bites in the holder, at center high above the bottom, and because both side of holder could be bottom side, two ditches had to be made, to accept the bite. 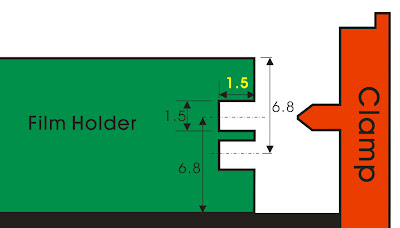 What clamps really grab the holder is thin leftover that between two ditches, which is thin and in plastic makes it fragile, I am not so confident of it. 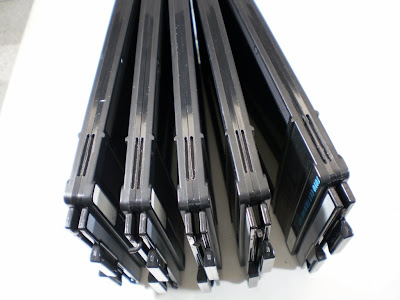 That thin layer of plastic, who bear the burden to takes the pressure from clamp, in my calculation, if film holder is 11mm in thickness, would be 0.6mm only, and if holder thickness gets more thicker, it maybe as thin as 0.5 mm.

I thought it should be better in stronger material, best steel, or even better in stainless.

So there goes the new improvement. Images bellow shows a rather big ditch was drilled each side, clamp would bite in the holder without any difficulty, but without a center layer to be pressed, clamps can not tightly hold the holder. 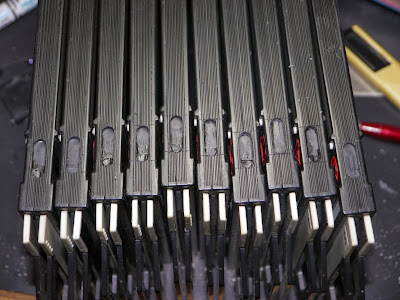 Inserted in a stainless sheet into the center of the ditch, you can see the difference between two ditch style, and original holder without ditch. 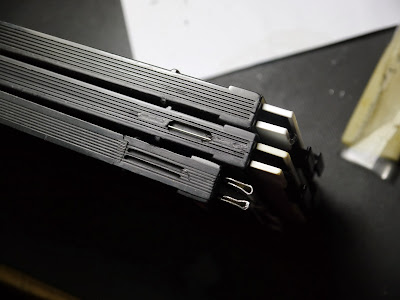 Masked putty with carbon fiber sheet at side, so here we have a beautiful DDS film holder ready for Byron. 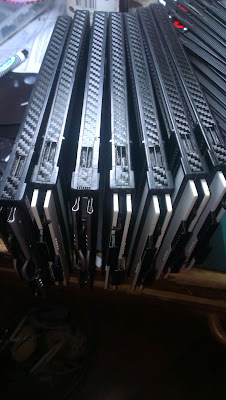 And the last, a slide is pulled out and kept by rotating lock, frees your hand, and reminds you to insert it back before you flip the holder.

Posted by Unknown at 10:14 PM No comments: Links to this post

I would love to see film photography is coming back.
http://www.japancamerahunter.com/2013/12/future-film-new-hope/#more-12837

What do you think?
Posted by Unknown at 1:25 PM No comments: Links to this post

Turn your cell phone into a cute film scanner

I would always want to do a cute gadget like this, to turn cell phone into a negative scanner. Not expecting to get good quality images, but at least it do open the chance letting old negatives share on the web.

What I dreaming of, is to open a small cafe, with this gadget on every table, so customers can sit chatting, and scan their negatives, kill some time and bring back some memories.

And since they had release APP for scanning, no need to worry how to get proper profiles of different films to turn a negative image back to a positive image, I think we can build our own scanner for cell phone, for negatives other than 35 mm format. That is just a combination of lightbox and a fixed height support only, no big deal, I want to digitize and file my 120 and 4x5 format negatives.

Buy the iPhone and Android Film Scanner at the Photojojo Store!
Posted by Unknown at 8:01 PM No comments: Links to this post

For sale one 110A Polaroid converted 3x4 instant film camera

I don't remember when I got it, and no idea who made the conversion, but this 110A converted 3x4 instant film camera is well made, RF mechanism was replace with 900 viewfinder, so rangefinder and viewfinder were combined into one, like a 110B, but body is a 110A. It equips with built-in Ysarex 127/4.7 lens, and has Polaroid 3x4 instant film holder attached, a typical conversion as can be seen in auction market. 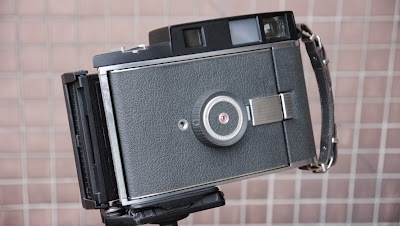 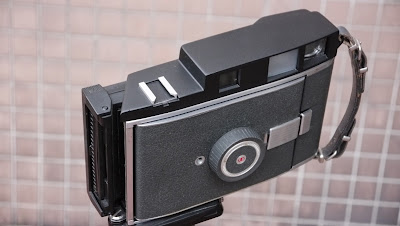 Front side of body keeps original leatherette, and I replaced the back and holder covering. 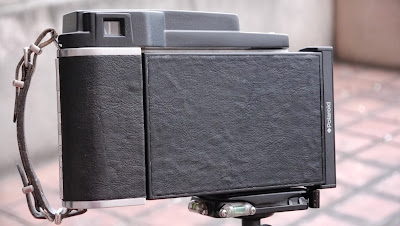 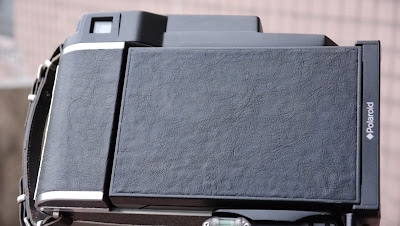 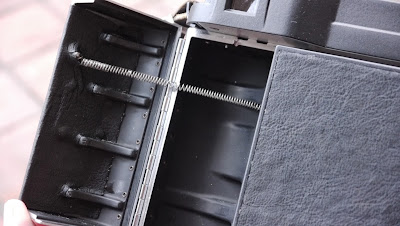 I took off the RF part, housing got putty-ed and re-spray paint, RF mechanism were cleaned and calibrated all over, re-aligned the overlay images, and replaced the cold shoe into a Byron version, so you can do off camera flashing, like last post shows. 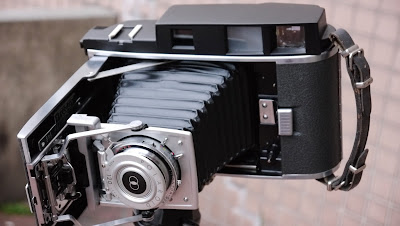 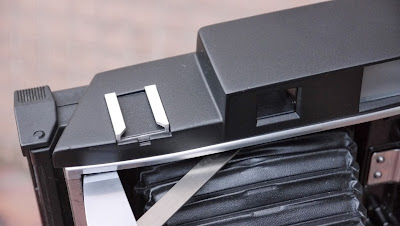 Bellows seems in good shape, I added one soft rubber press on shutter trigger, to improve the stability. 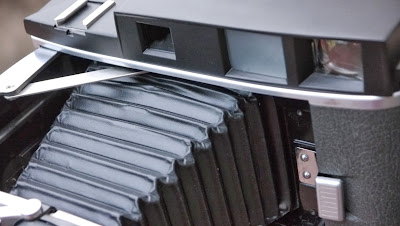 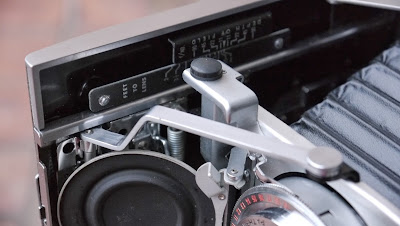 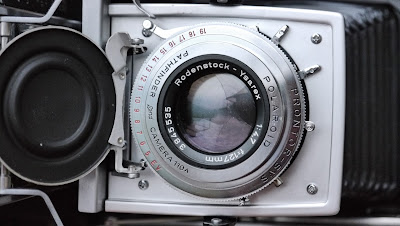 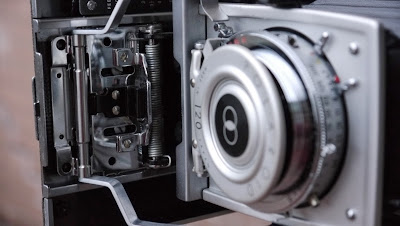 Operation is smooth and pleased to handle, I will include one neoprene protecting bag. 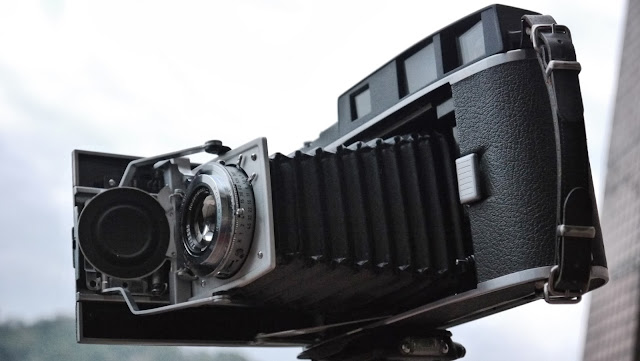 If you are interested in this beauty, please write me to salihonba@gmail.com

Posted by Unknown at 7:32 PM No comments: Links to this post

Street snaps need flash sometimes, for that you can add a flash hot shoe adapter on Byron, and connect flash with a pc cord, there you go, cold shoe now is hot, ready for light on your subject. 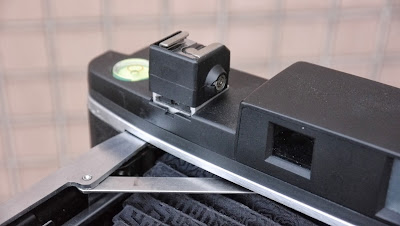 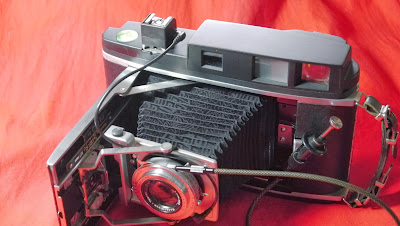 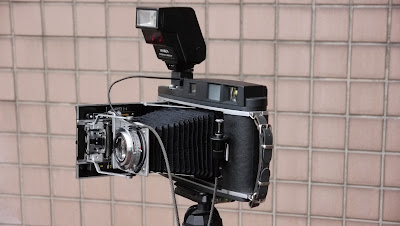 Does anyone know how to connect large format lens with a wireless remote control flash system? That pc plug seems not popular on most recent wireless system........

(12/05 add...)
Really stupid am I, just found out that stack up remote controller on top of the adapter, then I got off camera flash, that simple!! 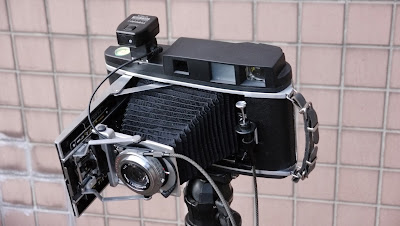 Hey! looks what I found!!


I love that thumb up!! Thumb up!
Posted by Unknown at 3:29 PM No comments: Links to this post

This is a Polaroid 110B converted into a 4x5 format fixed lens camera, converted by someone else, not me. The one that famous handsome US actor Bard owned, and everyone loves 4x5 would definitily loves to have one too.

Client sent it to me, asking to replace the focus knob that seems cool but awkward to manipulate, and get rid of those decorations to "make it looks like a normal camera". 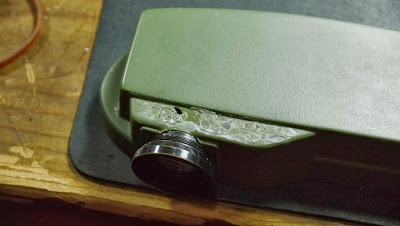 And the viewing window, converted into a round shape, claimed that improves viewing, I compared this with original viewing window, can not tell any difference, so I figured that must be my own problem, I am dull in some area, especially this.

I thought maybe I can learn something on this, I turned up the housing, to see how the view window were converted, then I found out that it was made by very sophisticated skillful hand, obviously, which beyond my ability and guts and I don't dare to copy, no mention to sell it out. 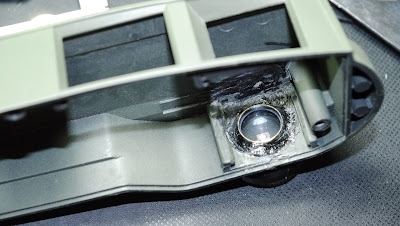 The RF housing was cut off at the end, to match the cutting body, so obviously there will be a cutting phase to compensate, that need some putty. Many converted Polaroids I had seen, were all get exposy putty with enough amount, to ensure that fragile end will hold the job.

But not this one, I thought the builder must be following kind of "lighter the better" philosophy, no matter how easy the housing cracks at that part, that was not his problem. 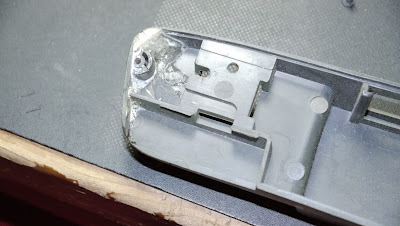 Managed to bring this cracking housing back to normal, the result is somewhat OK to me. Oh, and I replaced the cold shoe, hope it could be as good as the original one, that sticks with sponge tape onto camera body, so bold mind and so creative that I never think of. 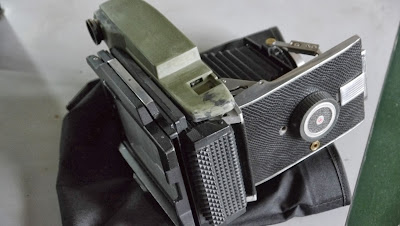 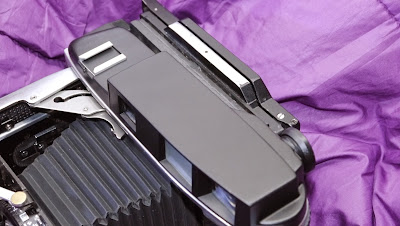 Replacing focus knob is an easy job, but I do admire that original converted knob, so pretty, so unique, and so hard to use. 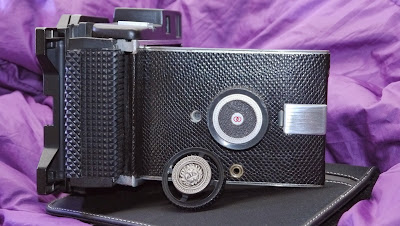 And the infinity stop, I replaced that Velcro version conversion has, for I still can not solve the secrets that fix lens with Velcro and sponge tape. I took off the Velcro, bring back into the original one from Polaroid, and added a steel plate to ensure the fix position. When replacing this part, I made the i.stop calibration, found that must be my calibration procedure has something to improve, for my calibration result did not agree with it, hope my client can live with my error. 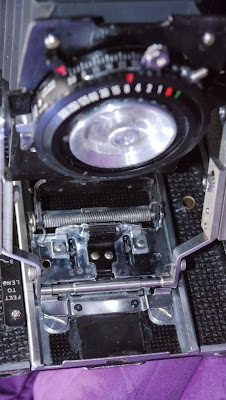 Well, these were some thoughts while I did the job, and I think best to keep myself in Byron area, only function counts, deco is not my dish......

Posted by Unknown at 10:22 AM No comments: Links to this post

Labels: 4x5, polaroid 110b into a 4x5 rangefolder, something else
Newer Posts Older Posts Home
Subscribe to: Posts (Atom)