Move house, off line for 1 week.

I bought a house in a small town near Taipei, called DaXi, a 300 years old little town by the creek, surrounded by farms and gardens, and I have a studio room by  Shihmen Reservoir, where I could rebuild my darkroom.


So I will be not able log online for about one week.


Till then, thank you very much.


Finally, everything on its way.
Today I am packing those parts for workshop participants, still one did not make it, all cried out at the stage of bellows practice.


Well, you are just practicing single-layer paper bellows, what will it be when going to 3 layer real world bellows?

What a happy working day!

Today is a great day! everything goes smoothly, even my ten fingers are fine, no one turns swollen.
Ha!
Posted by Unknown at 5:00 PM No comments: Links to this post

Welcome a new system into the family


Fetched Ellen from airport last night, she came from NY city, for a lecture hold in Taipei, and brought bunch load of camera items I bought from eBay these year round. I bidd some items from ebay and asked sellers send them to Jeff's place, who lives in NY, then at the chance that Ellen coming to Taipei, she carries those stuff for me.

Overweight, she cried out as we met in the visiting hall, truly, a big case full of my equipment, and so many items I even don't remember ever bidding. I took her to the famous night market for best local food, to ease her and her stomach.

Late at about 2am, back home, I tore down each package, and found one Mamiya Press 23 Standard body laid still, reminds me that is the one I'm gonna study for my snappy wide 6x9.

I've bought the Sekor 50/6.3mm already, and loads of 6x7/6x9 film back, just wonder the flange distance of it, so plan to find a Mamiya body as parts, to make a research. I would like to follow the idea as a Chinese did in following images, but since Sekor 50/6.3 lens equipped with shutter, focus ring on it, actually all I need is to make a box in proper length to connect the lens with film back, to keep them in perfect flange distance, that's it! 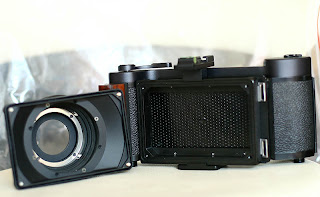 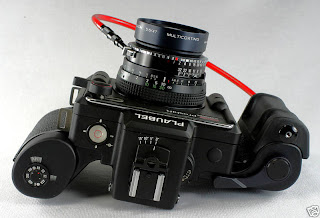 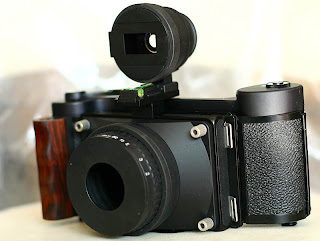 But the camera body I bid, is in GREAT shape! RF focus is right on tack, bellows is almost new to me, and as I mount on the lens and film back, I realized that actually I've built a new camera system already!
Posted by Unknown at 8:20 AM No comments: Links to this post