You can not see my new design cable release holder, but it is right there!
I don't like to spoil the simple style and outlook of camera body, so what I design for a cable release holder, is an innovative way, way beyond I myself could imaging! I really am proud about it! simple but elegant! 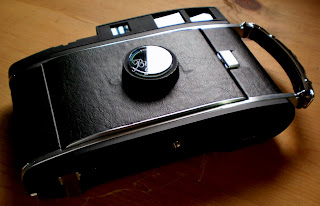 It is for your left hand, for your index finger......
Will show you how it works later, I need to buy a little parts for it now.

(02/11/09 Add)
In fact it is a typical ergonomics study, in product design. We try to gain the best results in compromising between operation functions and outlooks of product, in a cost effective way.
Here shows three possibilities for holding the shutter while taking pictures.
1. Cable at the side of body, in front of the strap
2. Cable at the side of body, at back of the strap
3. Cable beneath the view window, by side of door lock

No matter which position we put cable, index finger is the only candidate for pressing release.

Now we found out that position 1 & 2 makes index finger raise high for release, we will feel tired if keep that way for long time, and thus weaken the stability for holding camera, it seems the third way is the best choice. We should install a cable release holder just beneath the view window, according to the conclusion of the ergo study.

But the question is how a holder should be, and at which position?
Well, as I mentioned before, I am trying to keep the outlook as simple and neat as possible, in the reason of aesthetics, as well as cost effectiveness.
Another consideration is the trap that product designers often step in without awareness. They tend to treat themselves as a standard human body measure, when they feel comfortable on prototype, they think the size is right to everyone, but that is not true, they are not qualified representing as average people. This is why Ergonomics exists. I decide the position for holder according to my palm size, what about the user with smaller/bigger palm size, will they be feeling comfortable?
So you know the paradox, it seems I never got a chance to install a cable release holder, to satisfy every user. That puzzled me for a while, I am in a dead alley.
Months later, I reviewed the purpose of this holder, must it be stayed in a fixed place? how about a holder with some flexibility for different palm size?
That broaden my thought and I know how to solve it!!
I found a tiny product, made in stainless steel and spring, it is a pen clip, for holding a pen in shirt pocket. 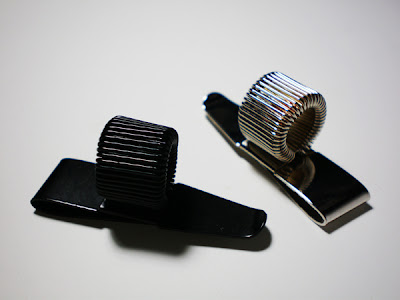 Let's use it as a cable release holder, looks like this: 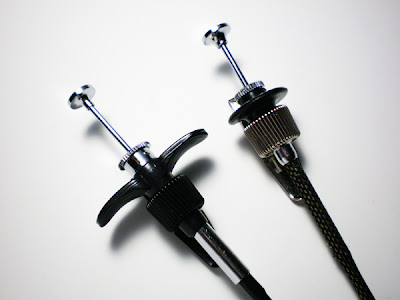 Now this clip becomes a "cable release holder", but how to make this holder fixed on camera body, and fits everyone's palm size? 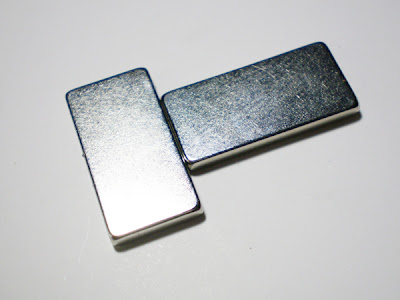 These magnets are very powerful when they attracted together, you have to use some force to separate them, I glue one in the clip with AB glue, and put another two inside the door lock. 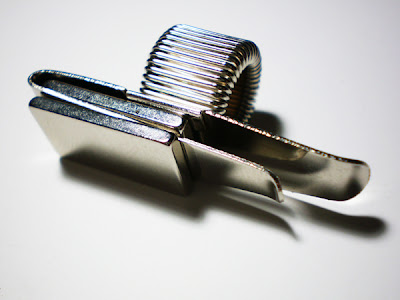 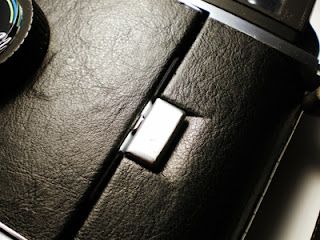 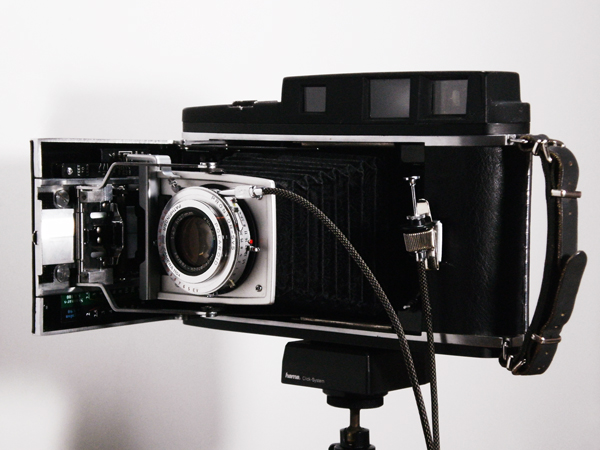 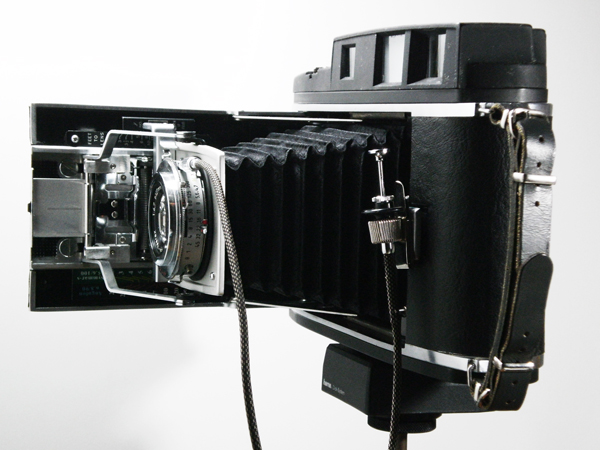 And since the holder is attracted by magnetic power, it is not dead-fixed on the door lock, means you can hold the release in any angle you like, according to your palm size. 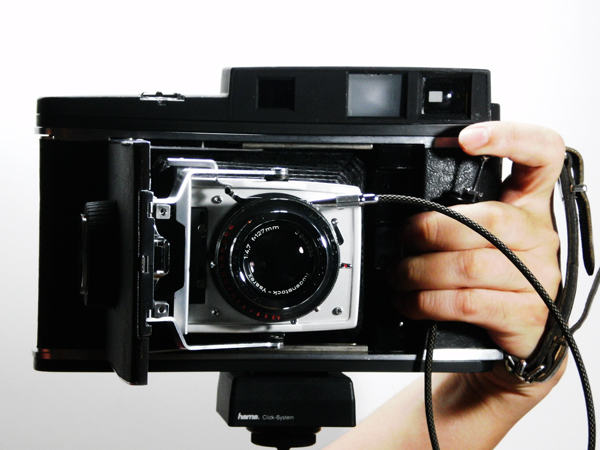 Magnetic power makes holder stayed on camera body well, but keeps flexibility, and when you take off the cable, you take off the holder too, keeps camera outlook neat and simple. A tiny part of the camera, but took me two months to set.

Did I mention that a chamber is in the camera body for cable release/holder storage? No? well, it has.
Posted by Unknown at 10:30 AM No comments: Links to this post

Basic conversion including:
more detail information please visit:
And then please contact me for your custom conversion detail, further discussion is a necessity for satisfactory services, especially for your own Byron.
Contact Me

I received a mail from xBay this morning notifying me the listing of Byron been removed, here is the reason they think inappropriate:

To avoid confusion, be sure to select a category that matches exactly what you're selling in your listing.......

Without any further suggestion, or any  buffering, just remove my listing in a sudden! I have been listed this for about 45 days already, without any question, I got 30 watches and 4 sold already! What my buyers would think of this? They will suspect that I am cheating them, just disappear without a sign! But that is what xBay made!!
I do really want to know in such a 4x5 film camera, what category is the right one, besides "5x7 and smaller"?

Posted by Unknown at 12:26 PM 3 comments: Links to this post

And for Polaroid 103 back, similar modification

After lathed by my mechanist, now the back is feasible onto Byron 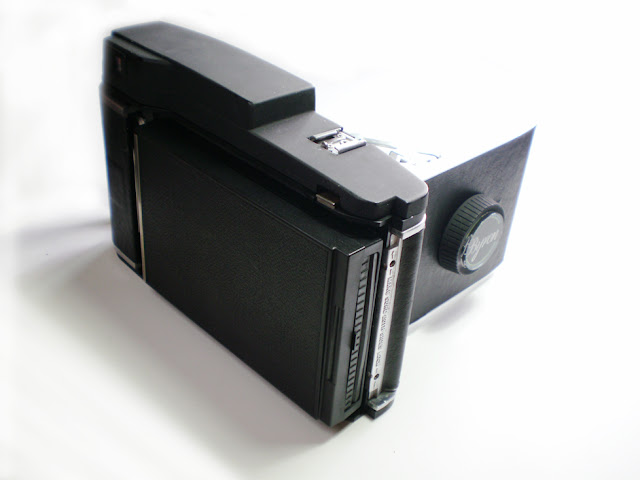 But some problems to take care of, first, the film back lock, second, dark slide can not be used, meaning you have to shoot all 10 films before changing other back.

"It seems 3x4 instant film is back on the menu, boys!"
--movie "Lord of the Rings- Two Towers"
Posted by Unknown at 3:36 PM 2 comments: Links to this post

Labels: 3x4 instant film, polaroid 110b into a 4x5 rangefolder

Four Designs camera is not feasible for Byron conversion

Reply to all who are interested in Byron camera, 110B that had been converted by Four Designs company, is not feasible for Byron conversion, since they all are body-cut, where the place for clamps on Byron.

I am sorry for that, but Byron conversion needs a complete 110B camera body.
Posted by Unknown at 9:15 AM No comments: Links to this post

Something you should know about Byron

I made a booklet in PDF file, about Byron Camera, 2.8MB, if you are interested in this camera, please download it and enjoy reading.

This is version 01, I hope to add Q and A chapter later, but I need your help, Please send me your question, I will be happy to add it on coming version.


If you can not download it, email me, I send it to you. 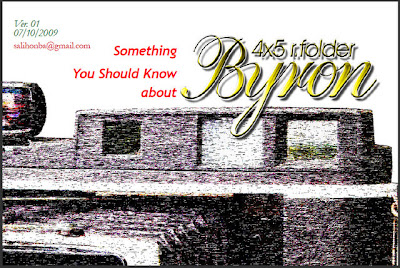 (10/12) I forgot to mention the cable release holder, it is on left side of camera body when holding, you can use it to limit vibration chances during shooting. This will add on next version.

Posted by Unknown at 3:58 PM 2 comments: Links to this post